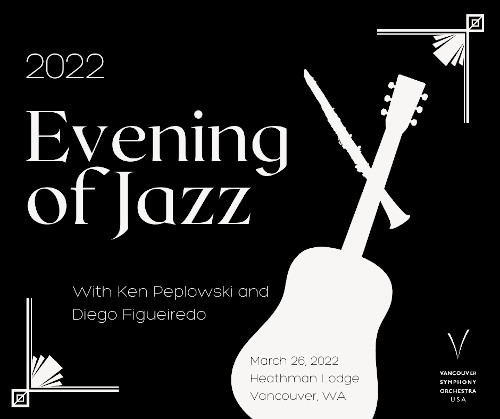 The Vancouver Symphony Orchestra is thrilled to announce the return of celebrated jazz clarinetist and saxophonist Ken Peplowski for the return of VSO USAs annual Evening of Jazz live benefit concert and dinner, along with GRAMMY nominated guitarist Diego Figueiredo. The event will be held at 5:30 pm on Sunday, March 26th at the Heathman Lodge in Vancouver, WA.

Peplowski is an award-winning artist and has played with legendary musicians from Mel Torme and Peggy Lee to Madonna. From polka bands to the Benny Goodman and Tommy Dorsey Orchestras and eventually Dixieland and jazz, Ken Peplowski has done it all. Figueiredo is an extraordinary star among the world's greatest jazz guitarists. His superb technique, timing and imagination have made him one of the hottest international names right now. His unique skills and performances have been a hit with audiences in more than 60 countries around the world.

Proof of vaccination or a negative COVID test from within 72 hours of the event will be required for admittance.

About the VSO
The VSO, now in its 43rd season, has been a cornerstone of Southwest Washington's arts community, providing symphony music of the highest caliber in live performances and through music education in schools, concert halls, and throughout the community. For more information, please visit vancouversymphony.org.

About Ken Peplowski
Clarinetist Ken Peplowski is well known to the Vancouver audience from the VSOs critically acclaimed Annual Jazz Night. Since 2016, Mr. Peplowski has returned every year by popular demand to delight the audience with his incredible artistry in front of the sold-out houses. Ken Peplowski has recorded over 70 CDs as a soloist, and close to 400 as a sideman some of the artists he has performed/recorded with include Charlie Byrd, Mel Torme, Rosemary Clooney, Erich Kunzel and the Cincinnati Pops, Peggy Lee, and Madonna. He has headlined the Hollywood Bowl, Carnegie Hall, the Blue Note, and Dizzys Club among other venues. He was a featured soloist playing Mozart in 2015 at the Siletz Bay Music Festival in Oregon and premiered a new concerto in 2016, written for him by Dick Hyman. Ken was the Musical Director of the Oregon Festival of American Music (OFAM) for eight years and is a longtime performer/consultant to The Jazz Cruise, where he was elected to the Jazz Cruise Hall of Fame in 2013.

About Diego Figueiredo
Diego Figueiredo is a new star of the guitar world. At 41, he has released 26 CDs, 3 DVDs, and he has performed in more than 60 countries around the world. He is winner of several important competitions such as the Montreux Jazz Festival. With a unique interpretation, renowned technique and emotion, his show has been acclaimed by audiences around the world.

Besides being a guitarist, Figueiredo is a producer, arranger, orchestrator, and multi-instrumentalist. With a variety of work already released, he performs on the most important stages around the world, enchanting and charming the public wherever he goes with his unique touch.