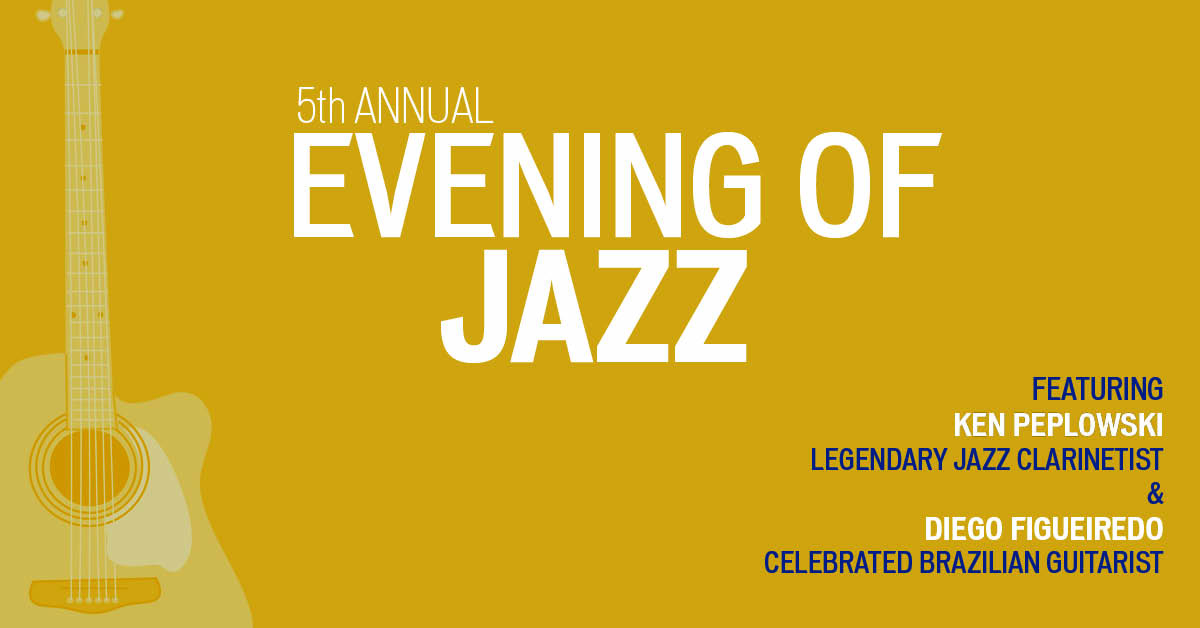 The Vancouver Symphony Orchestra is thrilled to announce its 5th Annual Evening of Jazz on March 29, 2020 at 5:30 p.m. at Warehouse ’23 on the Vancouver waterfront. Back for a 5th consecutive year is “brilliantly entertaining” (DownBeat Magazine) and “arguably the greatest living jazz clarinetist” (Russell Davies, BBC2) Ken Peplowski. Joining him is sensational Brazilian guitarist Diego Figueiredo who has twice been awarded as one of the greatest guitarists in the world at the “MONTREUX JAZZ FESTIVAL”.

Guests are invited to experience Mr. Peplowski and Mr. Figueiredo’s electrifying performance while enjoying the finest cuisine and spirits the Pacific Northwest has to offer. Their music is guaranteed to get everyone up on the dance floor.

“When you grow up in Cleveland, Ohio, playing in a Polish polka band, you learn to think fast on your feet”, says Ken Peplowski, who played his first pro engagement when he was still in elementary school. “From my first time performing in public, I knew I wanted to play music for a living.” Ken Peplowski has recorded over 70 CDs as a soloist, and close to 400 as a sideman – some of the artists he’s performed/ recorded with include Charlie Byrd, Mel Torme, Rosemary Clooney, Erich Kunzel and the Cincinnati Pops, Hank Jones, Peggy Lee, Bill Charlap, Woody Allen, Benny Goodman, and Madonna. He travels at least half of every year, playing clubs, concert halls, colleges, and pops concerts. He has headlined the Hollywood Bowl, Carnegie Hall, the Blue Note, and Dizzy’s Club amongst many other venues. Ken’s CDs on the Capri label, “Noir Blue”, “In Search Of ”, and “Maybe September” were released to great critical acclaim and massive airplay. He has recorded music as diverse as Italian and French folk songs, avant-garde jazz, pop, and classical music; he recorded the Darius Milhaud Clarinet Concerto with an orchestra in Sofia, Bulgaria, and was a featured soloist (playing Mozart) in 2015 at the Siletz Bay Music Festival in Oregon, where he premiered a new concerto in 2016, written for him by Dick Hyman. Ken was the musical director of the Oregon Festival Of American Music (OFAM) for eight years, and is a longtime performer/consultant to The Jazz Cruise, where he was elected into the Jazz Cruise Hall Of Fame in 2013. “Mr. Peplowski sounds the way (Benny) Goodman might if he had kept evolving, kept on listening to new music, kept refining his sound, polishing his craft, and expanding his musical purview into the 21st century.” – Will Friedwald in The Wall Street Journal, December 2012.

In 2014, Ken was the recipient of the Sarasota Jazz Festival’s “Satchmo” award, given to him for his “unique and enduring contribution to the living history of jazz”; in March, Ken was also the guest of honor at a “Highlights In Jazz” concert in NYC saluting him for “his matchless musical achievements”. He was the 2015 recipient of HotHouse Magazine’s “Fans’ Decision Jazz Award” on clarinet.

Ken’s new CD is called “Sunrise” and it’s a big band record of new arrangements written exclusively for him, plus some reworking of classic arrangements. His upcoming CD is a duo record with Brazilian guitarist Diego Figuereido entitled “Amizade”.

Ken is currently the artistic director of the Sarasota Jazz Festival, the Newport Beach Jazz Party, and the Newport, Oregon Jazz Festival. Ken Peplowski has also been bestowed the 2018 “Creative Arts Prize In Recognition Of Outstanding Contribution In The Field Of The Creative Arts” by the Polish American Historical Association.

GRAMMY NOMINATED GUITAR PLAYER Diego Figueiredo is a new star of the guitar world. He is only 39, and he has release 26 Cds, 3 DVDs, and he has been playing in more than 60 contries around the world. He is winner of several important competitions like Montreux Jazz Competition, and some others. Diego is now presenting his concert “From the Classical to the Jazz”. It is a fusion between Jazz, Bossa nova and Classical music. Diego has a unique interpretation, with a lot of technique, much emotion, and his show has been a great success about the audience.

Diego Figueiredo was born in Franca, Brazil, in 1980, and at the age of 4, he used to strike poses carrying his small guitar. At six, he got a mandolin, which was kept in a very special place in his house. Diego played many instruments before choosing the electric guitar when he was twelve, playing in theaters and local pubs, revealing the great art of improvising and harmonizing. At 15, he conquered theaters and nightclubs in many different Brazilian states, playing solo or with renowned musicians.

Besides being a guitar player, Diego is a producer, arranger, orchestrator, and multi-instrumentalist.

With a variety of work already released, Diego is doing shows on the most important stages around the world enchanting and charming the public wherever he goes with his unique touch.