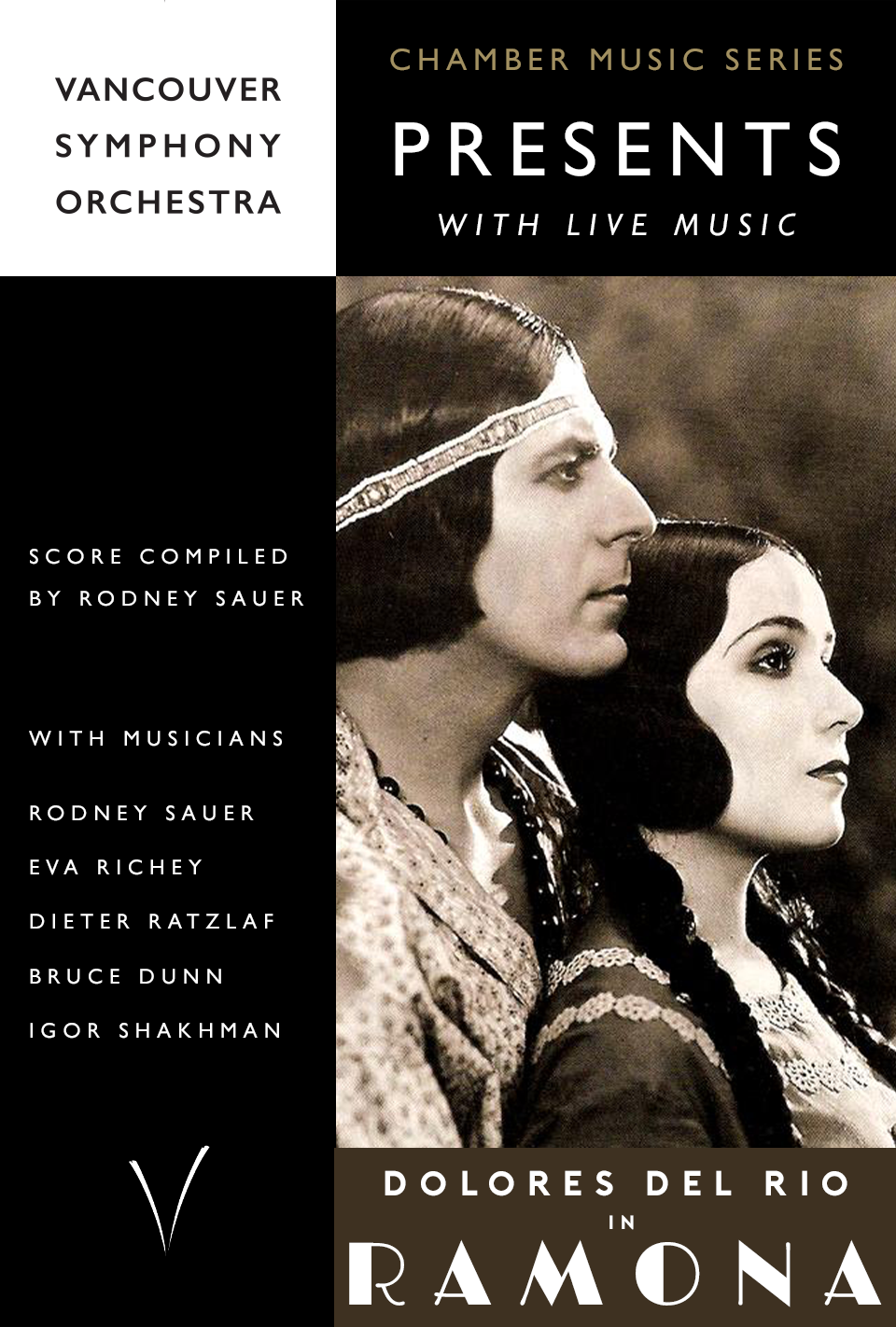 The Vancouver Symphony’s Chamber Music Series welcomes Rodney Sauer back to Vancouver, WA for a showing of the formerly lost Dolores Del Rio romantic tragedy Ramona (1928) at the historic Kiggins Theatre Thursday, January 27th. The concert begins at 7 PM with the evening’s acclaimed and moving film accompanied by live music as it would have been heard in the silent film theaters of the 1920s. This event is the second in a series of three silent film chamber concerts in the 2021/22 season, after November’s acclaimed and highly popular showing of Harold Lloyd’s Safety Last.

In Ramona, Dolores Del Rio stars as the titular Ramona, a half Native American woman raised by a Mexican family. Facing hardship and discrimination along with her Native husband Alessandro, she must overcome tragedy and heartbreak in a world that has little sympathy for people like them. The film is also noteworthy for having a Native American director, Edwin Carewe (born Jay John Fox), a trailblazer of early Hollywood who worked with many of the greatest stars of the day including Gary Cooper, Ethel Barrymore, and of course Dolores Del Rio, among others.

Once believed lost along with many films of the period, a print of Ramona was discovered in the Národní Filmový Archiv in Prague in 2010. The Library of Congress transferred the film from nitrate to acetate safety stock and converted the Czech intertitles back into English. The restored version was premiered in 2014, accompanied by Rodney Sauer and the Mont Alto Motion Picture Orchestra.

The Vancouver Symphony Orchestra requires proof of vaccination or a negative COVID test within 72 hours for admittance. Masks are required inside the building.

pianist and score compiler, studied at the Oberlin Conservatory while majoring in Chemistry at Oberlin College, and has appeared as piano soloist with the Boulder Sinfonia. He is an avid student of silent film music, and his article on the history and use of "photoplay music" was published in the American Music Research Center Journal. He is a frequent performer in various participatory dance genres from early 20th century ballroom dance to morris and contra dance. He also plays solo improvised silent film scores, although the Mont Alto Orchestra is his major musical endeavor. In 2001 he won a Musical grant from the Arts and Humanities Assembly of Boulder.

Eva began her career playing regularly with several orchestras including the Cincinnati Symphony, Columbus Symphony, West Virginia Symphony and Kentucky Symphony. She toured South America with the New World Symphony and played briefly with the Cape Town Symphony in South Africa. She attended the Aspen and Tanglewood Music Festivals, learning from such conductors as Leonard Bernstein, Seiji Ozawa, and Eiji Oue. Eva has also enjoyed playing popular music in concert events with The Moody Blues, Yes, Harry Connick Jr. and Rod Stewart. In 2001, She moved to the northwest where she began working with the Oregon Symphony as Associate Music Librarian, as well as holding two one-year positions in the second violin section. Currently, Eva is on the adjunct faculty at Clark College as violin instructor and concertmaster of the Clark College Orchestra. She plays regularly with the Portland Opera, Portland Chamber Orchestra and Oregon Ballet Theatre.

Dieter began cello studies at the age of seven and performed with the Portland Youth Philharmonic for six years, touring Europe with the orchestra in 1989. He went on to receive his Master of Arts in Cello Performance at the San Francisco Conservatory of Music. He has performed with the Oregon Symphony, Eugene Symphony, Portland Opera Orchestra (18 seasons) and the Oregon Ballet Theater Orchestra (10 seasons). Dieter was appointed principal cello of the VSO in 2005 and the Hood River Philharmonic in 2012, positions he currently holds.

Now in his 20th year as the VSO’s principal trumpet, Bruce Dunn is an accomplished freelance trumpeter who holds performance degrees from both Washington State University and Portland State University. A recipient of the prestigious Presser Foundation Scholarship, he can be heard in venues across the Northwest. He has performed in groups across the region including the Portland Opera, Columbia Symphony Orchestra, the Portland Chamber Orchestra, the Big Horn Brass, the Portland Festival Symphony, the Beach Cantata Choir and many others. He is also a founding member of the Columbia Rover Brass Ensemble. In addition to performing, Bruce is a National Board-Certified Teacher and the Director of Bands at Covington Middle School, Sunset Elementary and Silver Star Elementary in the Evergreen School District. He has also taught at Evergreen High School, Mountain View High School and Pacific Middle School.

Dr. Shakhman has been heard in recitals, chamber music concerts and concert appearances throughout Europe and the US. As an orchestral clarinetist, he has performed with the Colorado and Oregon Symphony Orchestras, Oregon Ballet Theatre, Colorado Opera Orchestra, Russian State Symphony Orchestra and the chamber orchestras of Moscow Virtuosi and Moscow Stars. As a chamber musician and soloist, he has played in international music festivals in Oregon, Colorado, France, Greece, Russia and Switzerland. Dr. Shakhman has participated in two critically acclaimed Broadway tours: the first national tour of Oklahoma! as principal clarinetist and on-stage soloist in the North American tour of Fiddler on the Roof. He received his B.A. in Music from Kharkov Music College, his Master’s from the Moscow Conservatory and his Doctorate from the University of Colorado. He teaches at the University of Portland and is the Oregon state chair for the International Clarinet Association. In addition to being principal clarinet for the Vancouver Symphony, he’s also the orchestra’s Executive Director.

THE VSO IS GENEROUSLY SUPPORTED BY INDIVIDUAL DONORS